Stocks have had a strong 2019, with the major U.S. stock indices establishing or nearing record highs in April and early May. Still, more Americans continue to believe real estate (35%) is a superior long-term investment to stocks (27%) or other investment options. 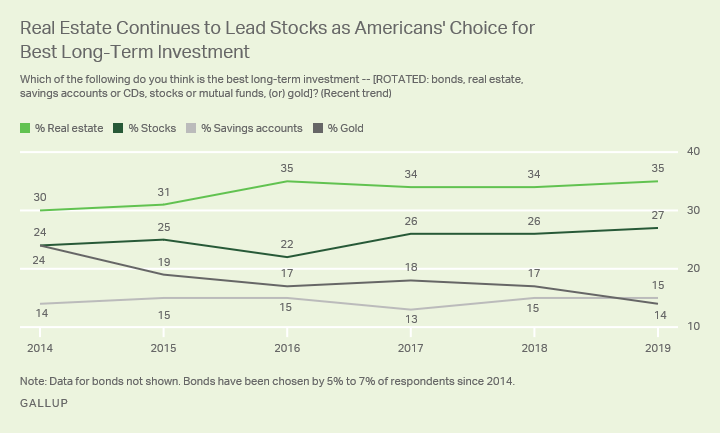 The April 1-9 Gallup poll was conducted amid the ongoing bull stock market, but before the recent stock index records. In recent years, the real estate market has also been hot, with home values in 2018 the highest on record, and Americans expect home prices to continue to rise.

Gallup has asked a version of the best investment question since 2002, and Americans' choices have varied, largely in response to the performance of the various investment options. In 2002, as housing prices were increasing rapidly, 50% of U.S. adults said real estate was the best investment, the highest percentage choosing any investment type in a single year in Gallup's trend. Five years later, as the real estate bubble was about to burst after values peaked, housing still ranked first but with fewer Americans, 37%, choosing it.

Between 2008 and 2010, covering most of the Great Recession period that saw plummeting home and stock values, Americans were as likely to name savings accounts or CDs as the best long-term investment as they were to name stocks or real estate.

Gold topped the list the first two years Gallup included it as one of the options, in 2011 and 2012, and essentially tied for first in 2013. In recent years, with both real estate and stocks showing consistent gains and gold prices falling from their 2011 high point, the allure of gold has faded. The 14% choosing gold as the best investment this year is down from 34% in 2011.

Stock Ownership Steady, but Not Back to Pre-Recession Figures

The percentage of Americans who invest in the stock market -- 55% -- has stayed relatively steady in recent years, improving only slightly from the low point of 52% registered in 2013 and 2016, despite the strong performance of stocks. The rate of stock ownership remains significantly lower than it was before the Great Recession, including 62% in 2007. 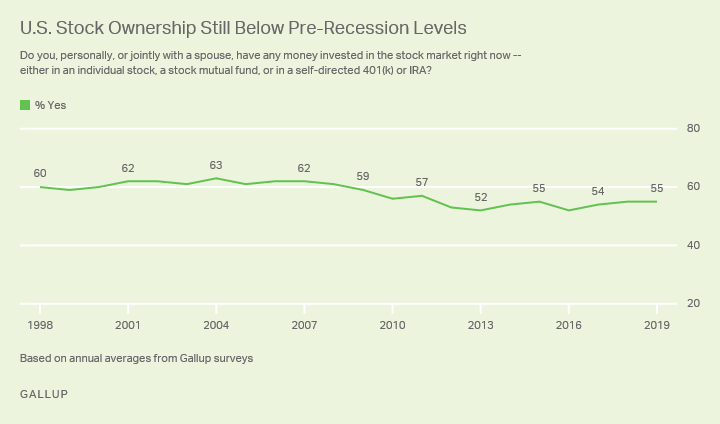 Previous Gallup analysis showed that stock ownership has declined among most major U.S. subgroups since before the recession, with the exception of upper-income and older Americans.

Stock owners, not surprisingly, are more positive than the general public is about stocks as an investment. Thirty-seven percent of stock owners (compared with 27% of U.S. adults) rank stocks as the best long-term investment option, essentially tying it for first with real estate (38%) among stock investors.

Americans who own both stocks and a home are also divided as to which is the best investment, with 40% choosing real estate and 38% stocks.

In that survey, just 19% chose real estate, perhaps because the question wording asked respondents to exclude their primary home when thinking of real estate as an investment. The differing results between the two surveys suggest that many stock owners see a primary home as a solid investment -- one that is on par with stocks -- but that a second home or another type of real estate investment is not as appealing as stocks are.

Americans who do not own either stocks or a home are more inclined to see real estate (31%) as a better investment option than stocks (18%), while 23% choose savings accounts or CDs.

Historically, stocks have performed better in the long term than real estate and other investments have, but Americans still regard real estate as a better bet. The recent gains in stock prices have been a boon to investors, but barely half of Americans have reaped the rewards.

Stock ownership remains down from where it was before the recession, perhaps because the financial crisis and resulting decline in stock values made it clear to would-be investors the downside to investing in the stock market. Even though more than a decade has passed, non-investors may remember the cratering of stock values and not want to take the risk.

Like stocks, home values also dropped dramatically during the recession but have rebounded and are worth more now than before the recession. Investors may place value on homeownership above and beyond its likely returns, including the use they get out of it as a place to live. Perhaps because home values are high and Americans expect them to continue to go higher, the public is less likely now to say it is a good time to buy a house than at any point in the past decade. Rising interest rates have made home buying less affordable -- so if the housing market cools, Americans may come to view stocks as a more favorable place to invest their money.

To continue searching, you must agree to the Terms of Use.

For the best experience, please provide your cell phone number and select accept below to opt-in to our Terms & Conditions and Privacy Policy to begin receiving text and voice communications.

or make a new notebook

Search the full MLS and Exclusive Property Listings.
(Prices and inventory current as of May 18, 2021)

Have a house to sell?

Find Out How Much Your Home Is Worth (optional)

We just need your phone number to finish creating your account.